Within These Walls... Exhibition

Since 2001, the National Association of REALTORS® has sponsored the Within These Walls... exhibition at the Smithsonian National Museum of American History, which chronicles the story of one home and five families whose lives intersected with American history at different crossroads. NAR and the Smithsonian announced that the Association will extend and expand its sponsorship, becoming exclusive sponsor of Within These Walls... from September 2018 through 2030. The exhibition has served as a tangible symbol of the role that NAR’s 1.2 members, or REALTORS®, play in making property ownership and the American Dream a reality for millions of Americans.

Within These Walls... centers on 200 years of American history as seen from the doorstep of a house erected in the 1760s in Ipswich, Mass., 30 miles north of Boston. Ipswich citizens saved the two-and-a-half story, Georgian-style timber-framed house from the wrecker's ball in 1963, which was reassembled for this Smithsonian exhibit. 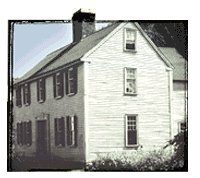 Peer through the home's walls, windows, and doors to view settings that would have been familiar to residents in colonial America and during the American Revolution, the abolitionist movement, the industrial era, and World War II.

Inside the 4,200 square-foot house, American colonists created a new, genteel lifestyle, patriots set out to fight in a revolution, and an African-American slave struggled for freedom. Neighbors came together to end slavery, immigrants earned a livelihood in their new home, and a woman and her grandson served on the home front during World War II. These are the true stories this house tells and what continues to make this one of the most popular exhibits at the Smithsonian National Museum of American History.

5 million visitors per year see the stories of five courageous Americans and the important role their homes played in their lives and in our country's history.

The Smithsonian National Museum of American History is at 14th St. and Constitution Ave. NW in Washington, D.C. The museum is open daily, 10 a.m. to 5:30 p.m., except Dec. 25. Admission is free.