Under RESPA, alleging deprivation of fair and impartial competition from a kickback scheme fails to establish actual damages.

Five years after closing on a home, homebuyers filed a putative class action against a real estate brokerage firm and a title company (“Defendants”) alleging a kickback scheme that deprived home buyers of “impartial and fair competition between settlement services providers, in contravention of RESPA.” Significantly, the homebuyers did not contend that they were overcharged in fees. The district court awarded Defendants summary judgment on the RESPA issue ruling that the homebuyers lacked Article III standing to sue because they did not state an “injury-in-fact.” Homebuyers appealed seeking treble damages and the court of appeals affirmed the lower court’s holding.

Article III is the constitutional minimum of standing.  At issue, in this case, was whether the homebuyers could properly allege the first element of Article III, injury-in-fact, when the presence of an alleged kickback scheme between a brokerage and a title company did not result in a tangible harm—only a deprivation of impartial and fair competition between settlement service providers. The court reasoned that RESPA’s proscription against kickbacks is enforceable by federal agencies, state attorneys general, insurance commissioners, and private citizens; however, for private citizens, to the extent that fees charged were reasonable, the injury was a “statutory violation without a real world effect” and not a harm that congress enacted RESPA to prevent.

In regards to the three novel theories presented by the homebuyers, the court found that (1) the defendants did not have a fiduciary duty to homebuyers, thus there was no duty to return any kickbacks to the homebuyers and no basis for concrete injury, (2) claiming unjust enrichment on the part of the defendants is still insufficient to establish concrete injury, and (3) paying for services “in contravention of RESPA” is not a concrete injury when no clear harm existed other than a statutory violation of RESPA. The court vacated the summary judgment award and remanded with instructions to dismiss.

The homeowner alleged that the defendants received money for referrals of services related to the financing.

The homeowner, an 83-year-old single, Hispanic male suffering from the early stages of dementia, has a home in Oceanside, California. Because his fixed gross income of $3,034 per month was not enough to pay his mortgage, his mortgage servicer modified his loan to make his mortgage affordable. In 2016, a door-to-door salesperson “from Home Energy Solutions, aka Clearview” came to homeowner’s home and “convinced him that he needed roof repairs and that his house needed to be painted, and that a government program would take care of it all.” The homeowner agreed to sign up because he was told that the “energy saving improvements would pay for themselves over time” and that he qualified for the government program. In reality, the Property Assessed Clean Energy (PACE) loan raised his monthly mortgage payment to the point where he could not pay his servicer, resulting in a default on his payments. Furthermore, he received no energy savings from the home improvements. The homeowner lost his home to foreclosure and was in the process of being evicted.

The homeowner alleged that the Defendants received money for referrals of services related to financing, charged him for unnecessary services, and conspired to “up sell” him. He alleges Defendants violated RESPA through “the conspiratorial nature of the misdeeds” and “Defendants’ general failure to properly advise him as to the roles and identities of the various entities that were handling financing at any given time.” Defendants moved for dismissal of the RESPA claim because it was time-barred. The court found that the tolling of the RESPA limitations period until August 2017, when homeowner became aware of the violation, was appropriate. However, the court held that it was not clear whether PACE financing is considered a loan or federally related mortgage for the purpose of compliance with RESPA in the first place. The court dismissed the RESPA cause of action without prejudice.

A home buyer’s assertions of emotional damages can meet the element of actual damages for a RESPA claim.

A homeowner took out a government-insured mortgage on her house in 2010, but fell behind on payments, leading the bank to begin foreclosure. In April 2015 while foreclosure proceedings were pending, Bayview Loan Servicing, one of the largest purchasers of defaulted government-issued loans, bought the homeowner’s mortgage from the bank. Bayview and the homeowner negotiated an adjusted agreement on her mortgage, and Bayview was able to stop the foreclosure on the house. Just a few weeks after the foreclosure proceedings had ended, the homeowner due to unrelated matters had to file for bankruptcy, but she continued to make monthly mortgage payments to Bayview. For a year and a half, the homeowner did not receive any financial statements from Bayview.  Then, in April 2018, she received a statement charging her a total of $28,279.60, which included $27,145.69 in “fees and charges.”

The homeowner was confused and concerned so she sent Bayview a letter asking for an explanation pursuant to RESPA procedures. The homeowner’s concern about these fees and charges aggravated her post-traumatic stress disorder (PTSD) and anxiety. Bayview responded mentioning foreclosure costs but the homeowner still wanted an explanation for $23,000 in “unspecified litigation costs and fees.” After a second response that the $23,000 came from extensive bankruptcy litigation, the homeowner still felt unclear about many matters and believed the $23,000 in litigation and $3,000 in foreclosure costs were erroneous because her bankruptcy was largely unrelated to her mortgage and the only thing Bayview did was file one motion. She alleged that Bayview’s responses were inadequate and part of a broader pattern of improper behavior.

The homeowner ultimately sued Bayview for several claims including a violation of RESPA.1  Bayview filed a motion to dismiss for lack of actual damages which the court denied. Under RESPA, a mortgage servicer must respond to qualified written requests from the borrower. The service provider must give requested information and must clarify or correct any charges of error. In order to file a RESPA claim, a plaintiff must plead actual damages, which Bayview argued that the homeowner did not have, reasoning that her anxiety was likely due to the debt itself. However, the court held that the homeowner’s claims of emotional distress, anxiety, and PTSD could have been due to Bayview’s lack of proper explanations or failure to correct errors and was sufficient to establish actual damages in order to survive a motion to dismiss.

No statutory or regulatory changes relating to RESPA were located. 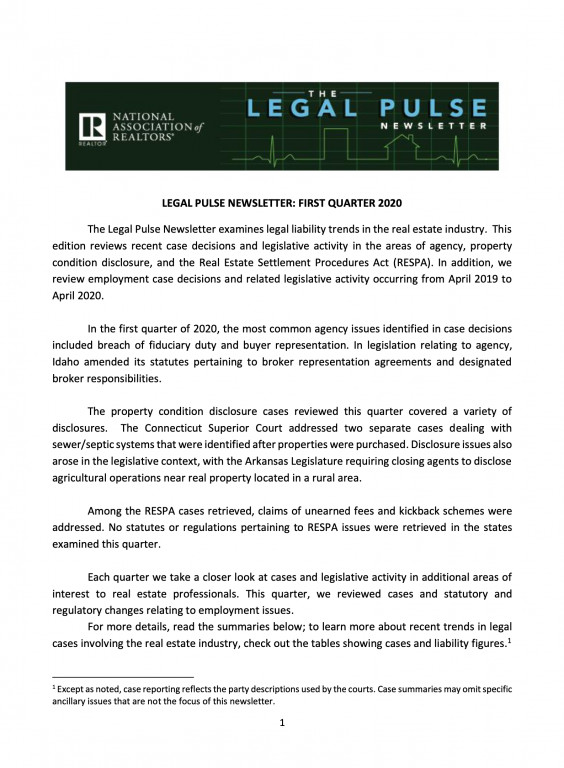 All Legal Pulse research and archived editions of the Legal Pulse newsletter can be found at the Legal Research Center's Legal e-Book Library.

Read a summary of this quarter's additions to the State Law Based Changes.